The Importance of Feeling Our Feelings

One of the biggest mistakes I made on my healing journey and that I see many of my clients make is when we tell ourselves that our painful experiences aren’t that bad.

We do ourselves a massive disservice when we pretend we’re ok when we’re not.

Each week I speak to students after class or my private clients, and they tell me about something major they’re going through (like a breakup, job loss, health problem, anxiety), but then they diminish their experience by saying:

“It’s not that bad. It could be worse I suppose, I shouldn’t complain, others have it far worse.”

I think the reason we downplay our suffering is that we’re trying to make ourselves feel better.

We think we’re looking on the bright side, being stoic or positive but what we’re really doing when we say things like it’s not that bad, is dismissing or even gaslighting our own feelings.

Ignoring and downplaying our feelings doesn’t make them go away. These suppressed feelings just get stored in the body as tension and anxiety.

This attitude of downplaying our suffering and toxic positivity is everywhere.

Like these things were consolation prizes that were supposed to make me feel better. Now I know that people mean well and want to help us, but telling us that things could be worse doesn’t really help.

All it does is makes us feel bad for feeling bad.

Just because others have it worse, doesn’t mean that our feelings aren’t valid.

And when we feel bad for feeling bad, we’re shaming and dismissing our own emotions. And because we deem these feelings as unacceptable, we suppress them in our body and subconscious mind. But just because these feelings are out of sight, doesn’t make them go away… the opposite is true. When we don’t allow ourselves to feel our emotions, we hold onto them.

Feeling bad about feeling bad is a meta-emotion (a feeling about our feelings). It can keep us stuck in a cycle of shame, self-criticism, anxiety, pessimism and feeling like there is something deeply wrong with us.

As if feeling bad about a break up wasn’t bad enough, we double down on the suffering by feeling bad about feeling bad. This is where so many people get stuck. Because shame, self-criticism, pessimism and feelings of unworthiness are immobilising. It’s tough to move forward when we’re stuck in the mud.

Yet if we just allowed ourselves to feel bad without judging ourselves, we move through our pain much faster, because emotions and feelings aren’t permanent. THEY ALWAYS CHANGE. But if we punish ourselves for feeling bad, we’re essentially digging ourselves a deeper hole which takes much longer to get out of.

I hear this all the time with my clients. They wonder why they can’t get over something that happened to them a while ago, and they berate themselves for not being able to move forward.

In addition to being stuck in the mud of our meta feelings (feeling bad about feeling bad), the other reason we can’t ‘get over’ a traumatic event is that we’re still subconsciously holding onto it.

How to “get over” it

The only way to process and move on from traumatic events is to properly acknowledge their effect on us and give ourselves full permission to get angry, sad, frustrated etc.

This is what is meant by the phrase, feeling our feelings is the key to healing.

We actually need to get present with our emotions – yet this can be terrifying. Especially if we’ve spent our lives putting on a brave face, bottling up our emotions and soldiering on despite feeling like we are falling apart on the inside.

Many of us struggle to find a healthy outlet for our emotions. It’s not appropriate to have a tantrum in public. It’s considered unprofessional to burst into tears at work, so we bottle it up. And then when we get home, we avoid our feelings by finding a way to numb out.

Often, we bury our anger and frustrations. All the little annoyances build and build, yet we continue to push them down. It takes so much energy and muscle tension to prevent these pesky emotions from coming to the surface (pool toy analogy).

And then when it gets too much, we can lose our shit over something relatively minor because it was the proverbial straw that broke the camel’s back.

A better approach is to become more aware of our feelings and when we sense a build-up, use movement to discharge and release the pent up energy associated with our feelings.

Emotions are neither good nor bad – it’s the way we react to them that is either healthy or not.

One of the things I teach in Yoga Alchemy is a healthy way to process our emotions by moving what we’re feeling.

Movement is a great way to release and discharge our pent up emotions. It’s a healthy and controlled form of emotional hygiene.

It’s impossible to get over something that we don’t allow ourselves to feel.

There’s lots of well-meaning advice out there just to let stuff go, but that can also be a form of bypassing.

Let’s say you argued with someone, and you remain angry and upset. If you don’t allow yourself to feel the anger and upset, these emotions will be stored as muscle tension and anxiety. And even though you try to let go of the event mentally, you still feel tense and anxious.

We can only let go of something when the associated emotions have been processed and released – otherwise, we’re storing it. Whatever we don’t express is suppressed.

Next time you catch yourself saying that “it’s not that bad or things could be worse” there’s a high chance you may be bypassing your feelings.

And if you’re wondering why you’re not yet ‘over’ something that happened a while back, likely, you’re still holding your unexpressed feelings. These feelings won’t go away until we feel them.

We don’t receive a lot of education in life about how to deal with our emotions. We don’t see healthy expressions, nor do we have positive role models. Instead, we’re bombarded with toxic positivity just to let it go, don’t sweat the small stuff, move on, be happy etc.

So if you find that you can’t let go, you can’t move forward, or that toxic positivity doesn’t work for you, try feeling your feelings instead.

And if you’re interested in learning to express and release your emotions to free yourself from inner tension, then you’re invited to join me in a 7-month journey into Yoga Alchemy.

Book a free call to see if Yoga Alchemy is right for you. 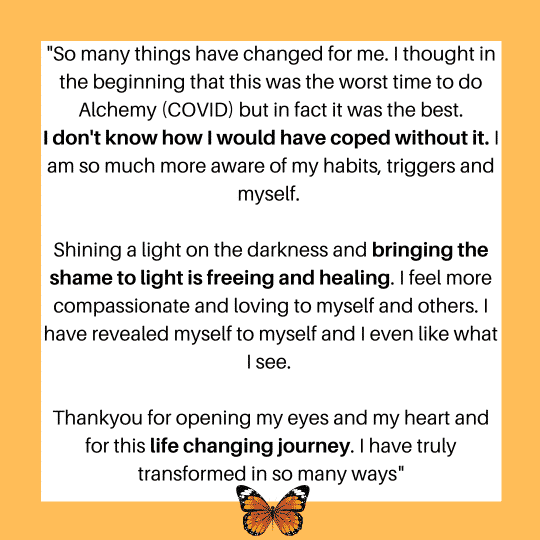